Everyone has heard of will-power. A few executives may have heard of won’t-power. Those two are just half the story. There are two more (at least): want-power and don’t-want-power. In “Executive coaching: Beyond will-power” we explore all four. What are they, and what is their role in executive coaching?

Will-power is the sense of drive and commitment you have to “will” yourself to do something. Usually will-power is needed when you (we: this applies to us all) have something that you want to achieve that is good for you long-term, but less than pleasant in the short-term. In executive coaching, in my 30+ years experience, almost always will-power plays a role. Techniques are used to strengthen your resolve towards your planned actions. Perhaps it is self-evidently true that if you are being coached, if you have increased your will-power towards your given outcome, is more likely you will achieve your planned result.

What can be equally harnessed and developed is won’t-power. Won’t-power (and all of the definitions here are applied, rather than academic) is the the sense of drive and commitment you have NOT to do something that you would normally do. Usually won’t-power is needed when you have to deal with something that is felt to be good for you short-term, but harmful and counter-productive for you in the long-term. Similar techniques are adopted to harness your won’t-power. Perhaps, here too, it is self-evidently true that if you are being coached, if you have increased your won’t-power towards resisting a behaviour counter-productive to your desired outcome, it is more likely you will achieve your planned result. Are you spotting the pattern?

Want-power is the sense of desire you have towards a given outcome. It is different from will-power in that the sense is more emotional, where as with will-power it is more cognitive. Usually want-power precedes will-power. Yes, I know that is not what most people think. Here is why it is the opposite to popular perception. As humans we tend first to want then to will a particular outcome. You and I make decisions emotionally and justify them, and enact them mentally. When we have a strong want-power AND strong will-power we have much greater chances of achieving. As previously, executive coaching techniques are adopted to enhance both.

“Executive coaching: Beyond will-power” as a title should now make sense. There are (at least) three clusters of technique beyond will-power. If you know how to harness just one of the powers your chances of success are dramatically increased. Can you image what you could achieve if you could harness all four powers?

As a highly visible example, a world champion body-builder, male or female has to apply all four powers to achieve such status: want-power, don’t-want-power, will-power and won’t-power. Rather than giving a lengthy analysis, let’s illustrate with just one of the four self-control powers: won’t-power. 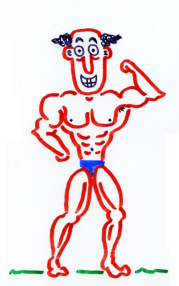 In order to best display the muscles developed after so much effort, as much of the body’s fat as possible has to be stripped away. That is achieved by adopting a diet that few people could tolerate. The potential world champion develops amazing won’t-power. They won’t eat carbohydrates when they are “cutting-up.” Ask any body-builder what it feels like to cut-up to the extent needed, and your will understand just how much won’t-power they have had to develop to achieve a body that looks like theirs. Closer to home, ask yourself or your relatives how easy you/they find it to control your/their diet.

Body-builders may appear to be all brawn and no brain, but that is VERY far from the truth. They achieve mental mastery at a level few people ever reach. If you have never thought much of their sport, if you have never considered just how much of their sport is mental, perhaps now the fascination makes sense: the body displays what has already been achieved in the mind.

Executives who learn and master the techniques, of want-power, don’t-want-power, will-power and won’t-power, achieve massively more than those who don’t.  Which will you be?

PsyPerform has a wide range of effective techniques available to help you harness your will, won’t, want and don’t-want-power.

The more you harness those powers the more you will achieve. When the techniques are applied in executive coaching we find that between 71% and 86% of the people we coach are promoted, within 6 to 18 months of starting work using the techniques.

If you seek career advancement, whether that be promotion to CEO, or if you are already CEO and you wish to lead a larger organisation, contact PsyPerform for a free development session with Prof Nigel MacLennan.