If you are or aspire to be a leader, and are a candidate for leadership development by your organisation for leadership coaching, how coachable are you? Your coachability level can make the difference between reaching your potential and unknowingly sabotaging it. Find out how coachable, or otherwise, you are. If you are currently uncoachable, what can be done about it?

To prevent some readers taking personally the points in what follows, we will talk about a third party: person X. If person X cannot be coached, and X has no other way of becoming aware of their career blocking current limitations, X’s career can come to a halt. It may take person X years to realise that his/her last promotion was just that, their last.

It could be worse: most people are promoted one level above their competence limit (by virtue of dead person’s shoes and other factors). That may mean that when X discovers that the last promotion was, indeed, their last, meaning final, it may come with the realistation, by X and their employer, that X is unable to do their current job.

If person X has been in post for any substantial period of time, a return to their previous job, to the level where they were competent, is no longer an option. That then means either dismissal or “redundancy” in the UK, or with more liberal employment laws in the USA, firing. All because the person was uncoachable.

Harsh truth coming up. In over 30 years of coaching I have observed this: some people are simply uncouchable, by anyone. Others are minimally coachable, some are moderately coachable, and others can only be (minimally) coached by a person who validates their world view. Perhaps this is obvious: those who are maximally coachable have the greatest probability of reaching their potential, and are the same people who seek help whenever they need to increase their skills base or add to their capability repertoire.

Now it’s time to get personal.

Where do you sit on the leadership coaching coachability continuum?

Take this quiz to get an indicator of whether you are leadership coachable; to understand whether you are likely to be ‘potential reacher’ or a ‘potential repressor’.
Be honest: to what extent do you agree with each of the following statements?
Rate yourself on each one, on a scale of 0-10, where
0 is: “I totally disagree.”  10 is “I completely agree.”
1. Only people better educated than me can coach me.
2. Only people who have reached higher positions than me can coach me.
3. I should have been promoted by now.
4. I have never had a coach.
5. I will never need a coach.
6. My industry is unique; only people in my industry can understand it.
7. I have all the skills and knowledge I need to reach the top.
8. Coaches, and other psycho-blah-blah-blahists are commercial lightweights, hired by the fly-weights in the human remains department.
9. Coaches are going to spout the latest transient leadership buzz and expect me to believe it, and spout it, too.
10. No chitchat with any so called leadership coach can change my performance.
End of indicator quiz.

Now, tally up and write down your score.

Before the analysis of your score, some background. Each of the above statements I have heard several times over many years of leadership coaching, usually during the pre-coaching discussion phase.
When you are in this field for the long-haul you see what happens to such people. It will come as no surprise that people who are uncoachable, or near uncoachables, end up suffering career self-sabotage. 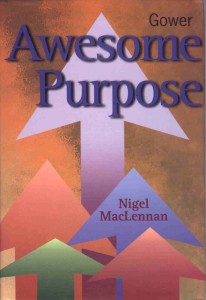 Here is just one (very typical) example. A newly appointed CEO of a major UK national organisation (which you know) set a new ‘vision’ for his organisation. I contacted him, and send a copy of ‘Awesome Purpose’, to trigger awareness that his ‘vision’ could be made compelling. We met, to discuss the possibility of helping him with the factors necessary for a vision to be inspirational and effective. Needless to say, I received a toxic cocktail of the above statements. Equally needless to say, he was gone in less than 6 months, removed by his board and shareholders. The position he had spent his life working towards was gone, all because he was uncoachable, and was not prepared to address that problem.

If you scored more than 60 you are probably uncoachable or close to being uncoachable. The more of the questions you agreed with, the more uncoachable you are. In this indicator a low score is career-desirable.
However, if you scored highly, there is hope, but only if you are asking: What can I do about it?
If you do want to know how you can make yourself coachable your potential may be salvaged, or even reinstated.
Caution: let’s not give false hope to those who have none. If you score highly and you don’t want to know what you can do about it, please stop reading. People who are uncoachable completely deny that they are uncoachable, or deny that there is any efficacy in coaching, more usually, both: “Of course I cannot be coached, who would waste their time in such a way when there is business to be done?”

For those with minor coachability impairments there is much hope.

How? If that is you, you can hire an expert leadership coach, who is also a psychologist. S/he can address your coachability blockages.
Isn’t that an interesting paradox?  The best hope for those who are of limited coachability is a psychologist coach, to coach using psychology based techniques, the near uncoachable person through their the coachability blockages!
How do you assess whether there is any hope for someone who appears to be or is nearly uncoachable? Ask them if they would like an expert coach to help with their coachability blockages?
If the response is negative, or even hostile, you know there is no hope.
Here is the hard reality, some people make it impossible to help them, and pay a very heavy price.
Typically, only some hard-hitting  massive adversity can shake such people out of their uncoachability.

Over the years I have noticed that for some, their uncoachability is the causal factor that leads to the lack of skill, which in turn leads to the adversity that shocks and traumatises the uncoachable in to being coachable.

However, in the absence of such a “mind-clearing-adversity” for many such people, their careers are ended, or blocked, and they never understand that they are or were the cause.
Few, if any, people seek coaching help for their total uncoachability. People with lessor impairments sometimes do.

If you or someone you know may have impaired coachability contact PsyPerform to discuss the system to remove the blocks, increase their/your coachability, and reclaim their/your potential. PsyPerform’s “Release Your Leadership Potential” programme is backed by guarantee. Each session identifies and removes a self-imposed career blockage or there is no fee. If you wish to take a zero risk option to unblock your career contact PsyPerform.

If person X is uncoachable s/he will likely have already said no addressing their uncoachability, even before establishing what can be done, or how.
Much more probable is that person X never even read this article, and as result does not know that there are now effective techniques to address uncoachability and get leadership careers back on track.
If you have read to this point, that tends to indicate that you are either fully or partially leadership coachable, or are willing to address uncoachability.
Prof Nigel MacLennan
Copyright 2016 PsyPerform