Home » Blog » The 10 Commandments of Change – Make Your Changes WORK!

The 10 Commandments of Change – Make Your Changes WORK!

The 10 Commandments of Change, what are they, why do they matter to you?

Here’s why: almost all change attempts fail, and fail expensively. You will have seen it over and over again in your career. A series of big announcements are made at corporate HQ, trumpets blare; a brave new world is about to be born… and then reality hits.

Fanfares are heard no more. The “big plan” is rarely if ever talked about, and mentioning the losses that this latest failed “change programme” needlessly incurred is political suicide.

Even worse, usually the very same people who have just burned (typically) tens of millions of pounds go on to “lead” the forthcoming round of change disasters (without having even attempted to learn from their previous money burning behaviour).

That is a picture, which, unless you have been amazingly lucky, you have seen over and over again.

Yet, in some organisations, the exact opposite is true. Every change that is planned, is carried out successfully, every time, over and over again. What accounts for the difference?

The leaders of change understand what makes changes work, and what causes them to fail. The answer is simplicity itself: follow The 10 Commandments of Change, in full.

“Oh, if it were that simple all change programmes would work!” you might reasonably say.

Yes, if you actually follow The 10 Commandments of Change it IS that simple.

Challenge: “Put up or shut up!”

Hold me to that: send me details of a failed change programme, I will conduct the analysis and tell you which of the change commandments was (most) breached to cause the failure, (usually several commandments were breached).

You might think that change programmes fail from major breaches, and that would be a logical expectation. Alas, all it takes is one partial breach of just one of the commandments and it is game over for the entire change programme.

Reflecting on the change programmes you have seen failing, I’ll bet you can pin-point a small number of causes of the big consequence failure. And that is the experience of most people; they can see when it going to fail before the failure.

Leaders whose change programmes always succeed have the knowledge to see potential causes of failure BEFORE they happen, and put in place everything that is required; they follow (knowingly or otherwise) The 10 Commandments of Change.

The 10 Commandments of Change – Now in Audio Book 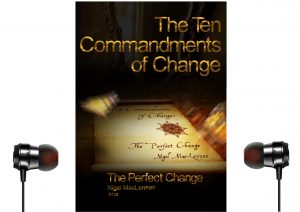 You may know that Psyperform, only makes its cutting-edge material available to valued clients (to give our clients a competitive advantage). Accordingly, The 10 Commandments of Change are now available in audio book. In 2 hours and 20 minutes, if you are a Psyperform client you can learn about commandments and how to make them work.